COVID-19 Dear travelers, we are pleased to share with you that we have received fully vaccinated & boosted as well as training courses on safety measures for our new reality. In such a way that we are prepared to receive all our visitors from around the world with the appropriate safety and hygiene standards for your safe and comfort.   "Go with Jerry the Safest Way to Travel" by avoiding large tour groups.

Chichen Itza: A Marvel of the World by Gerardo Jerry Ham 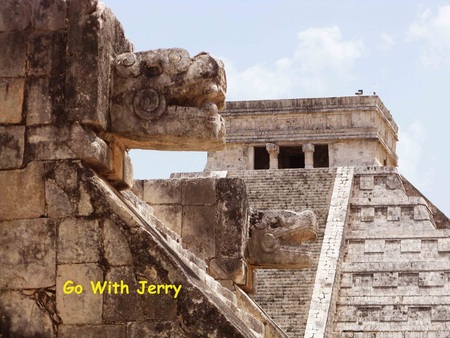 Chichen Itza Go With Jerry
Chichen Itza is one of the most spectacular archaeological sites of the Mayan Culture located at a relatively short distance from Cancun and Riviera Maya. Today we can admire what was their impressive religious civic complex: a great plaza surrounded by elegant decorated buildings; to the east the "Warriors Complex", named this way for the multiple elements in the stonework representing the two warring breeds: the jaguars and the eagles.

Walking toward the south, you will find a temple called "The Snail", which is considered the most important astronomical observatory of the epoch. This building is aligned for the clear observation of Venus because for the Mayan, Venus had a remarkable importance: Venus, after the sun and the moon, is the most brilliant and notorious planet in the sky. Venus also never goes too far from the sun, for that reason the pre-Columbian man associated it with the Star King. Venus has a double identity - in some months it is known as the "Star of the Sunrise" and during others "Star of the Dawn" - both associated to Kukulcán. Thanks to these astronomical observations and the handling of "the zero", the ancient Mayans created sophisticated charts that allowed them to design two calendars - one called ritual "Tzolkin" of 260 days and another called "Haab" of 365 days, being without doubt one of the most extraordinary discoveries in the ancient astronomy.

To the west, the field of the Ball Game, the biggest one found today in all Mesoamerica, measuring 170 meters long by 70 meters wide. The objective of the game was to pass the ball by the center of a stone hoop, only hitting the ball with the hips, elbows and shoulders. The game was played between two teams using a vulcanized rubber ball weighing up to four kilos.

The ball game was also used for political relationships. The governments solved their problems by means of a game, therefore the game served to avoid war. Many governments or states played against their enemies and they won or lost their causes in the field of the ball game.

The ball game is not only the first game organized in the history of the sport, the importance of the game was more religious than sport. In fact was a ritual that represented the eternal fight between the day and the night and upon the arrival of the Spaniards, the ball game was prohibited by the conquerors who considered it a pagan rite.

To the north the Sacred Well is located and according to Diego of Landa, bishop of the New Spain, in the XVI century rituals were practiced to honor Chaac, God of the Water and Rain. In the center of the square two platforms are located for ritual dances and in front to these, in the heart of the great square, we find the imposing Temple of Kukulcan, which is product of the deep knowledge in geometry, mathematics and astronomy that the residents of this city reached. Most of the tourists say that “they go to the ruins”, but these same tourists are astonished when they observe that “these ruins” nowadays continue working as when they were conceived centuries ago. For the spring and autumn equinoxes, people observe an optic illusion that is possible by combining the geometric construction and the setting of the sun. This way when the sun goes descending slowly, it forms triangles of light and shade, the figure of a snake that lowers smoothly from the north stairway, and when the sun is in an exact point, with clarity we can look at the complete figure of the snake connecting with the head, (a splendid sculpture that lies at the base of the temple). This mystic moment it is known as the slope of Kukulcan and is bound to the beginning of the agricultural cycle.

Chichen Itza is located in the lowlands of the north of Yucatan. It has more than 300 hectares of calcareous surface, among the vegetation of the low and thorny forest. Historical sources tell us that the city was founded between 415 and 435 after Christ. Mayan sources, such as the Chilam Balam, speak about the arrival of Kukulcan. In 1556, Diego de Landa describes some parts of the city, but the first extensive explorations were carried out by John L. Stephens between 1841 and 1842. Their reports were accompanied by drawings by Frederick Catherwood, showing Chichen Itza to the world. From there followed a great quantity of explorers such as Augustus Le Plongeon in 1875, Holmes in 1895, and Maudslay in 1900. Edward Thompson came in the first years of the 20th century, but serious and scientific investigations of 1923 and 1939 by groups of Mexican and foreign archaeologists consolidated a great part of the city. Though exposed to the world as it is, this city has not ceased to be a marvel of the world.